The numbering system above is based on the number of total breweries opened in Idaho during the Craft Brewing Era.   Idaho started 2020 with 73 active brewers and ended the year with 81 active breweries for a net gain of 8 breweries.  Two Breweries closed during the year and Bella Brewing added new owners and became Loose Screw Beer Co.

SUMMARY OF THE IDAHO BREWERY ACTIVITY IN  2020

The Treasure Valley now has 29 breweries with two more ready to open in 2021, but the biggest brewery boom is in Eastern Idaho where Pocatello now has 4 breweries within one mile of one another.  Two years ago, there was only Penny Pink's Portneuf Valley Brewing.  Forty five minutes to north, Idaho Falls has 3 breweries and another forty five minutes to the east of Idaho Falls, there are two breweries in Victor and another two breweries in Driggs. Teton County in southeast Idaho can claim the most breweries per capita with a brewery for every 3,000 people.
North Idaho has two new breweries bringing the number of their total breweries to 29 tied for the most with Southwestern Idaho.   Lewiston has a brewery again with the  addition of Groundwork Brewing.  They lost MJ Barley Hoppers in 2018.
Idaho added 75 new breweries in the last decade while closing 15 breweries over the same period.  Only 21 breweries open today started pouring their beer before this decade. Idaho has approximately one brewery for every 22,000 people living in Idaho.  That puts Idaho in the top ten states by brewery per capita.
The question is "Are there enough breweries in Idaho or are there too many?"  I know Eagle needs a brewery and Caldwell could use another Brewery.  How about Meridian?  I think there is still room for new breweries in the state and I am really looking forward to a new brewery near Melba.  Is this the year that it opens?

List of Idaho Breweries - Includes a list of every craft beer brewery  that has opened in Idaho since Time Batt's Snake River Brewery between Caldwell and Notus.  Also includes a complete list of all the breweries that have opened and closed in that time.  There is a list of breweries that plan to open in the near future too.

Posted by BoiseBeerCulture at 9:40 AM No comments:

Ed Danti and Greta Mohr opened Idaho's 109th Brewery on Friday,  December 18, 2020.  Twisted District becomes the Treasure Valley's 29th brewery and the 81st Idaho brewery currently  in operation.  It also fills the gap between Western Collective and Loose Screw in Garden City.  Garden City now has 7 breweries, but only one Brew Pub!  That would be Twisted District Brew which has a kitchen.

This brewery is the most unique brewery in Idaho as the beer is actually brewed in New Zealand and Germany.  The wort is then sent to Bud Mohr where he ferments it in one of his four 5BBL fermentors.  Bud also dry hops the soon to be beer.  That means their German style beer really was brewed in Germany.  Bud works with the foreign brewers to develop the recipes for the beer brewed over there. You can't get that anywhere else in Idaho.

Twisted District Brew Co is the 11th Brew Pub in the valley which means they serve food from their own kitchen.  Twisted District is Garden Cities only Brew Pub. They have no grill, so no burgers or fries,  but a decent array of Dogs, Salads, Briskets, and Chili.  Check out their menu here.

I had the Buffalo Brat which was excellent and my wife had the deviled eggs that were very good too.  Buddy Mike really liked the Guinness Beer Brat.

Twisted District will open at 11:00 7 Days a week.  Check their facebook page for closing times.

P.S.  These guys are a Beer Buddies Hub

This brewery is a family affair with one of the co-owners, Greta working with her son, Bud, the Brewer.

Check the Flight Holders in the photos below:

The brewery has no HTL, Mash Tun, nor Brew Kettle.  It has four 5BBL refrigerated Fermenters.  I asked Bud if there were any plans in the future to brew their own wort.  He told me probably not, as they were very happy with the current plan.

Posted by BoiseBeerCulture at 10:03 AM No comments: 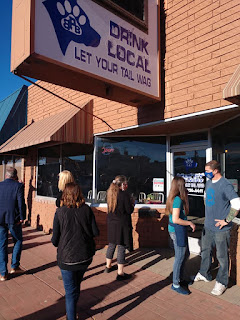 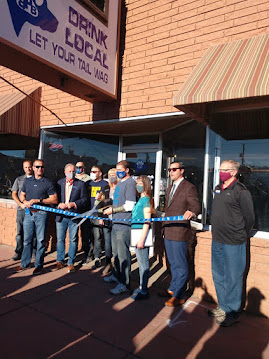 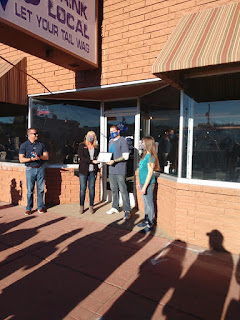 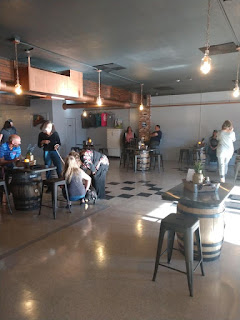 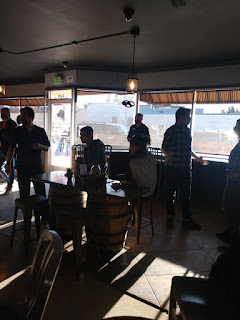 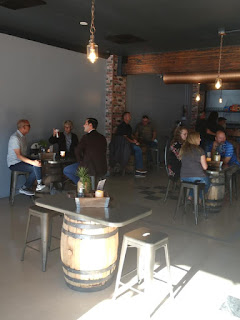 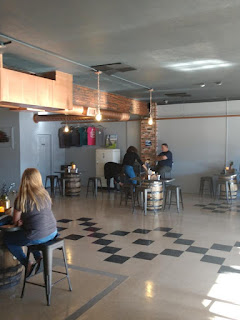 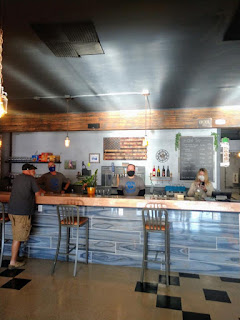 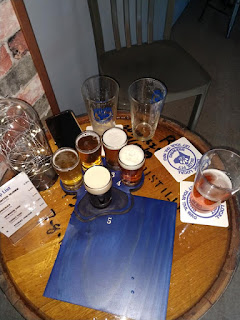 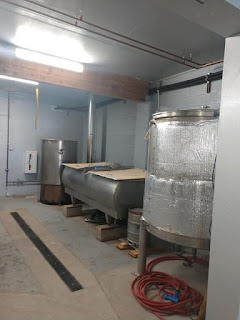 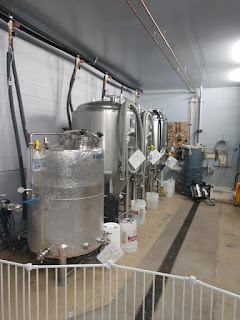 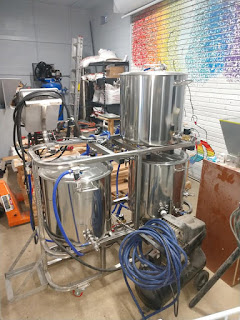 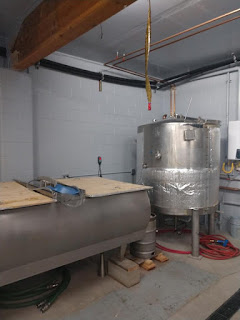 Posted by BoiseBeerCulture at 9:55 AM No comments:

2C Family Brewing in Nampa adds new outdoor seating in front of the brewery.  Great place to sit outside and watch all the people walking around downtown Nampa while drinking beer and eating a chorizo. 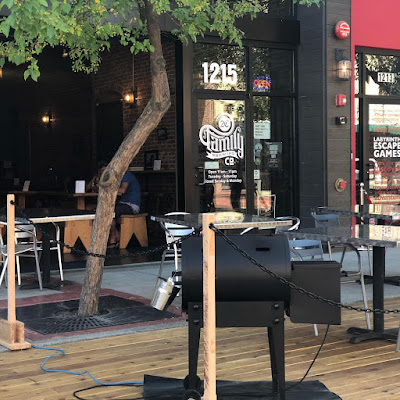 Beth and Steve opened their small production brewery in 2014.

After years of searching,  they found Fire House #6, a perfect location for a brewery.  They opened their new tap house in 2019, but were unable to use their new brewery equipment until July 2020 due to government paperwork.

Recently, they turned their brewery and tap house into a Brew Pub with the addition of a food menu.  Matt Gelsthorpe is their new chef.  You may remember Matt as the beer guy at Boise Coop.

I had the opportunity to visit the new Brew Pub last week and loved their food which can be paired with one of their own great beers.

102 Off The Rails Brewing in Pocatello

ONE IDAHO BREWERY WILL OPEN IN 2020 WAITING FOR LICENSE

TWO IDAHO BREWERIES THAT MAY OPEN IN 2020

Posted by BoiseBeerCulture at 2:32 PM No comments:

SPRING CREEK BREWING COMPANY IS A DESTINATION BREWERY  AND PIZZA RESTAURANT LOCATED IN THE AVIMOR COMMUNITY ABOUT 2 MILES NORTH OF SHADOW VALLEY GOLF COURSE ON HIGHWAY 55 ON THE BANKS OF SPRING VALLEY CREEK. 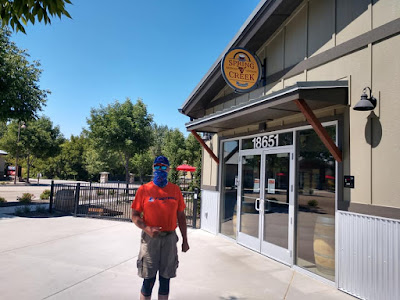 Check HERE to see a list of all the breweries in Treasure Valley.

Lots of outdoor seating in the back and on the southside of the brewery.

This is where the pizza is made and cooked over a wood fire.

Seven Beer Barrel Brew System with fifteen bbl fermentors and bright tanks.  It should be  big enough to have eleven Spring Creek beers on tap.

Large Overhead doors connect the main dining area to the West Side Out Door seating area.

The last blog I wrote was about Idaho's 100th brewery, Eight Twelve Main in Caldwell.  Here is a list of the breweries that have opened since then.

Sad to report that 2 breweries have closed in 2020

Eight Twelve Main is a brew pub with emphasis on their food with consists of burgers, french fries, and hot dogs. Owned by Keith and Heidi Hall, it is operated as a family business.  On opening day, they had aunts, uncles, cousins, parents and many other family members helping out.

Their brewer is Eric Roberts who has experience as a home brewer.  They have a one beer barrel system which is twice as big as most home brew systems and is considered a nano brewery.  They currently have four of their own beers on tap.  In addition to their own beer, they carry a lot of the local brewery beers on their 22 taps.  They offer flights and tasters, and plan to become a member of BoiseBeerBuddies.

My wife and I really love their burgers.  You get to pick from a large array of toppings and the beef is procured locally.  They pride themselves on using local ingredients from Canyon County.  Great fries actually dipped in the grease from their burgers.


Eight Twelve Main is a great addition to the Revitalized Downtown Caldwell and becomes another great place you can stop for a local craft beer in Canyon County.  I am excited to actually have a brewery in my home town again.

Below is the list of Idaho breweries that will open in 2020. Most of these breweries are under construction and are in the process of getting their licenses.  All of the breweries listed have their land acquired.  At the end of 2020, Idaho will have 109 breweries that have opened since 1984 and 85 of them still operating assuming no breweries will close their doors in 2020.

It looks like Spring Creek Brewing and Eight Twelve Main Brewing will both open in the first quarter of 2020.  Gem State awaits paperwork before breaking  ground, so they will probably not open until the last quarter of 2020.  As breweries open, I will announce their openings on the IDAHO CRAFT BEER CULTURE Facebook Group.


THE SIX NEW IDAHO BREWERIES THAT OPENED IN 2019

Posted by BoiseBeerCulture at 9:04 AM 2 comments: