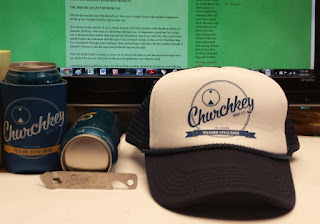 One of the most unusual of the new craft breweries that will be adding Boise to their market is Churchkey Beer Co.  Maybe you have heard of them, they are the guys the do not have a pull tab on their beer can.  Indeed, you have to use an old fashioned "churchkey".  For the younger generation, do a google search on churchkey to understand what I am talking about.  There is also one in the photo above.  In my younger days, all the guys carried a churchkey in the front pocket.  You used them to open cans And bottles.  I carried different device these days.....but it only opens bottles.

Anyway, but the subject at hand, here is a copy of the Churchkey Beer Co. press release:

THE STORY BEHIND CHURCHKEY BEER CO.
THE DREAM: A FLAT TOP BEER CAN
Why the flat top beer can? Why the hell not? We’re just a couple of guys who wanted to experience drinking beer straight from the original beer can.
Over dinner in the summer of 2010, Adrian Grenier and Justin Hawkins both shared an interest in someday drinking a beer from an old flat top style beer can – to experience a great beer in a simple can as the generations before them had enjoyed. Wondering what it was really like, this conversation quickly lead to the realization that this type of can no longer existed. So the seed for Churchkey Beer Co. was planted. Through many meetings, beers and meetings with beers, the two founders brought in industry veterans to join the cause and get the flat top can just right.
Now, for the first time in nearly 50 years, we are able to introduce a great beer enjoyed straight from an original flat top can. Much like in the past, thoughtfulness and integrity mean
something and should have a place. It’s why we find ourselves attracted to the artisans and craftsmen in our world. To us, it’s worth to putting a little extra effort back into our modern-day lifestyle.
THE HOMEBREWERS: LUCAS & SEAN
After perfecting the flat top can, our next step was to find the perfect recipe. Our Portland-based home brewers Lucas Jones and Sean Burke have been home brewing beer together in their garages for many years. They share these homemade brews with their friends at backyard BBQs and give them as gifts during the holidays. Lucas and Sean love this hobby, and are passionate about their beer and the community they cultivate with it. We are very excited to have these two all-American guys create the recipe for the Churchkey Pilsner.
THE LIFESTYLE:  IT’S WORTH THE EFFORT
Resurrecting the flat top can may not make sense to some.  Why make it harder to get to your beer? Well, because to us anything great is worth the effort.  It’s why Churchkey Beer Co. celebrates the skill of craft brewers, artisans, makers and doers of every ilk.
Whether it’s turning the wrench on your bike, building your own backyard smoker, growing your own garden or any other pursuit that requires a bit more effort, Churchkey is there to reward a job well done.
Cheers!


ABOUT CHURCHKEY BEER CO. PILSNER
FLAT TOP CAN
Back to simple times with simple tools that transform an interaction into an experience. For the first time in nearly 50 years, an often forgotten beer experience is available once again in the form of the original flat top beer can. Protected from both light and oxygen by highly recyclable aluminum, we make great beer in the most classic can because it’s worth the effort!
WHAT IS A CHURCHKEY?
The opener used to open a flat top beer can is called a churchkey for several reasons. The original openers used on bottles (before beer cans existed) looked similar to a large old fashion keys used by monks to not only open the church, but keep the precious beer they brewed safe. The name was then adopted to all tools used to open beer–with an ironic twist–for it is said if you used a churchkey opener (i.e. if you drank beer) you would be less likely to open the door of a church to attend service.
TASTE & INGREDIENTS
Churchkey Pilsner is a refreshing, crisp, Czech-style pilsner delivered in a flat top can using only high quality traditional pilsner malts grown in North America. Hopped with Nugget and Saaz hops to provide the classic pilsner finish that delivers thirst quenching satisfaction and a want for more.
SPECIFICS
Posted by BoiseBeerCulture at 2:13 PM