It had been five years since my wife and I attended and that is way too long to miss this great event. This Blog is a summary of some of our experiences this year.

Day 1:  We left Boise at 8:30 on Thursday and arrived at noon in Pocatello where we stopped for lunch at Penny Pink's Portneuf Brew Pub. 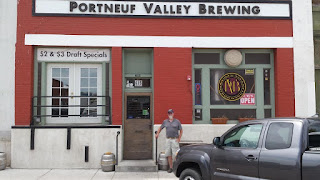 We had a flight of 10 Beers for $10.00 and had a very nice lunch. A visit to the Portneuf Brew Pub is a must for craft brew fans.  Located in the warehouse district, but just a few blocks from the Idaho State University Campus, this is the first brewery in the State of Idaho to be built and and operated by a women brew master.

After our visit to Pocatello's only brewery, we headed north to Idaho Falls.  After checking into our hotel, we boarded a bus headed for Victor, Idaho and the Grand Teton Brewing Company.  The Idaho Brewers United (IBU) and Rob Mullin, head brew master at GTB, hosted a Social Meeting for members and friends.  We had Brats and Beer....a lot of great Grand Teton Beer.  We then listened to two education presentations by staff members of the brewery, before we bought some beer to go and got back on the bus for the 70 minute trip back to the hotel. A little history of the  IBU.

We knew about half the people on the bus, so we got to meet many new brewers and craft beer support people.  We sat across the aisle from Mac, Mickey and Duffy from Mick Duff's Brewing Company in Pondoray, Idaho.  I have been to Mick Duff's Brew Pub before, great little Brew Pub in downtown Pondoray...a must visit on your way to visit Laughing Dog which is just a few miles away. Kerry and Cory sat in front of us on the bus and shared a couple of bottles of the Edge Obligatory IPA.  Behind us were Chris and  Nick, both beer judges from Boise and members of the local Boise Homebrew Clubs.

Day 2:  We headed downtown Idaho Falls and met up with a couple of friends from the Snake River Brewers Home Brew Club.  Steve and Jeremy were both in Idaho Falls to judge the beer in the competition.  After having coffee with Steve and Jeremy, we headed over to The Celt for lunch and beer.  We tried several of the local beers on tap from Idaho Brewing Company and Snow Eagle Brewery.  Then we walk two blocks down the street to MarCellars, a local craft beer and wine bottle shop where we grabbed some hard to find craft beer for our hotel room and trip back to Boise,

We then headed over to the hotel for the Idaho Beer United Annual Meeting where they elected officers and discussed legislation impacting local brewers.  One of the functions of the Idaho Brewers United is a lobby organization.  They represent the voices of all the Commercial Brewers in the state of Idaho at the State, local and Federal Governments. Currently, less than half of Idaho's 50 Breweries are IBU members.  Hopefully over the next couple of years, all of the Idaho Breweries will join the IBU.

At the meeting, \Dan and Chris from Mother Earth provided a selection of their beer.  Great news for Treasure Valley Craft Beer Fans, Mother Earth should be brewing in Nampa by August with the Tap Room open in September.  The meeting lasted from 1 to 3.  After the meeting, we met up with another beer judge friend, Steve from Nampa.   We had a beer on the back patio next to the river and waited for the Awards Ceremony to commence.

The Awards Ceremony was a blast with lots of cheering and celebrating by those brewers, breweries and fans of  those breweries.  We sat with a group of beer judges from Boise and the Edge Brewing Crew.  In tables around us, we had people from Mother Earth, Mick Duffy's, Salmon River, Grand Teton, Powderhaus, Sockeye, Slanted Rock, Boise Brewing and Bear Island.

Lots of different kinds of beer shared with all the attendees.  Below are some of the photos from the event.

The NABA Competition brings a lot of people from a lot a breweries across the country and since they  are already in Idaho Falls, many of them bring their beer to the Mountain Brewer's Beer Fest.  Which means there are over 100 breweries with over 300 beers at the Brew Fest.  This Brew Fest draws nearly 7,000 people and raises a lot of money for local charities.

Our Brew Fest Day Experience:  The Buses were going to start leaving the hotel at 11:00 for the Brew Fest, so we went over at 10:30 to check it out.  Found out they started leaving at 10:30, so we got on the bus and were at Sandy Downs by 11:00 where we got in a very long line to wait for the gates to open.  Once the gates were opened at Noon, each person was issued a 2 ounce plastic cup for their beer.  There would two large squares of tables with those serving the beer on the inside and those drinking the beer on the outside.  We started on the North side of the first square.  Since there were 2 of us sharing, we were able to try a lot of new beer.

Just watching the crowd at this event is a lot of fun.  We saw a lot of college age kids that had just turned 21 in the last year and we talked to one Vietnam Was Veteran who had a walker and was having a great time.  A lot of people had pretzel necklaces and others had a lot of bead necklaces.  Some had large sombrero's and some girls had bikini tops.  Everyone was very friendly and became friendlier as the hours passed.

After completing the first square, we took a break for lunch.  There were a lot of food trucks serving food from Cajun Crawfish to BBQ Ribs. There was also a lot of great music coming from assorted local bands.  The only shade was under the beer tents, so we returned to the shade and resumed sampling the beer in the second square of tables.  All in all, we tried beer from a lot of breweries that you can't find in Boise.  Kept track of few on Untappd, but gave up after awhile. Too many beers in a short period of time.

One thing we notice this year was that there were a lot of high ABV beers served.  A lot of Imperial IPA's and a lot of barrel aged Stouts and Porters.  Which meant we had to be very careful.  Just a few of those 2 ounce pours could leave you a little tipsy.  We drank a lot of water and tried to take it slow, but we still had our fill about 4:00 and caught the bus back to the hotel.

Below are a few of the photos that we took at the event.  The photos from inside the tents came out too dark to show. 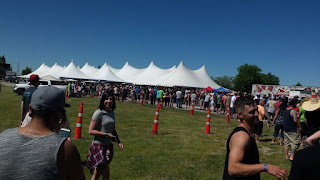 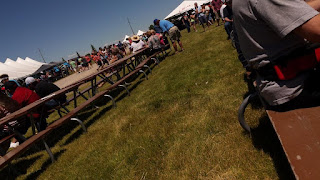 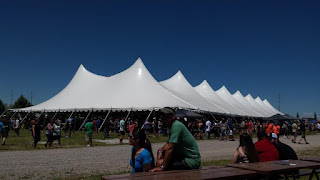 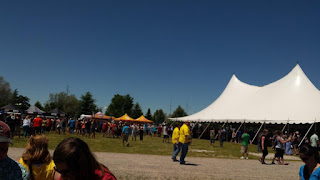 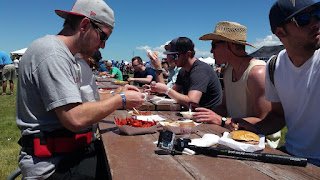 In Summary, if you love Craft Beer, this is the Brew Fest that you need to attend and it is a short 5 hour drive from Boise.  Highly recommend the trip.  You will have a ton of fun.

Posted by BoiseBeerCulture at 12:03 PM