Idaho could boast a total of 61 breweries at the beginning of 2018 including Heavens Gate in Riggins that did not make my 2017 year end list.  We have added FIVE more breweries since then and one brewery has reopened with a new location and new owners.


New owners Jeff and Maerene Cutler unite with the former Crooked Fence Head Brewer, Jeff Winn to bring back some of Boise's favorite Beers.  Jeff and Maerene moved the 15 bbl brewing system back to Garden City from the Crooked Flats Highway 16 location.  The new address for the brewery and taproom is 5220 North Sawyer Avenue in Garden City only a coupe of blocks from their original location.

Jeff and Maerene want all the old customers to know that they will continue to honor their Crooked Fence Club Cards.  They also plan to add sandwiches to the menu soon. 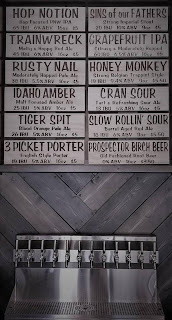 Jim Dandy Brewing has opened a brewery and tap house.  They will rely on food trucks to serve food for their patrons.  They will become Pocatello's second brewery located just a half mile north of the Portneuf Valley Brew Pub that opened in 1996.

This brewery actually opened in 2017.  Heavens Gate Brewery was opened in late Spring of 2017 by Paul Gatti who is also the brewer.  The Taproom for the brewery is located in Summervilles Bar & Cafe.

Hardware Brewing was opened in March of 2018 by Doug and Christine Lohman.

Priest Lake Brewing opened at the beginning of July.

Utara Brewing Company is currently brewing beer and will begining serving their own beer in their Brew Pub in the next few weeks.  This unique brewery will  the brewery #65 in active Idaho Breweries.  Utara is unique among most craft breweries in that it well serve India Cuisine instead of the normal burgers that most brew pubs serve.  There beer will also be unique as they will brew English Style Ales.   I assume that an India Pale Ale will be one of their offerings.

GUNS AND OIL BREWERY IS BREWING IN GARDEN  CITY

The long awaited Guns and Oil Brewery is brewing and preparing to open the Tap Room around the end of July.  You will remember this location from the days when Payette Brewing brewed their beer there.

WHAT BREWERY WILL BE THE NEXT IDAHO BREWERY?

Koto Brewing in Twin Falls Idaho.  My latest response from the Koto Brewing owner when I asked about an opening date was "best we can say is soon".  So I think they will be open by the end of Summer.

IN ADDITION TO THE NEW BREWERIES, TWO NEW CRAFT BEER VENUES HAVE RECENTLY OPENED IN BOISE


I visited Bru on Tuesday tried out their pour your own beer system.  I was impressed.  I just tried a few ounces of several beers.    Total Cost $3.07!  It was easy and I really like the Idaho Only concept.
I will be taking my out of town visitors here to show off this unique venue.


I visited Hops and Bottles on opening day.  This  Boise's first true bottle shop that does not sell Brew supplies or food.  With nearly 400 beer choices, it will be the place to go as new beers appear in Idaho.  I like that you can grab a beer out of the cooler and drink it there along with the many beers on tap.  Go down and visit Mark and Barley and get your favorite beer.

Posted by BoiseBeerCulture at 10:38 AM