A celebration of dark beers - Imperial stouts and porters 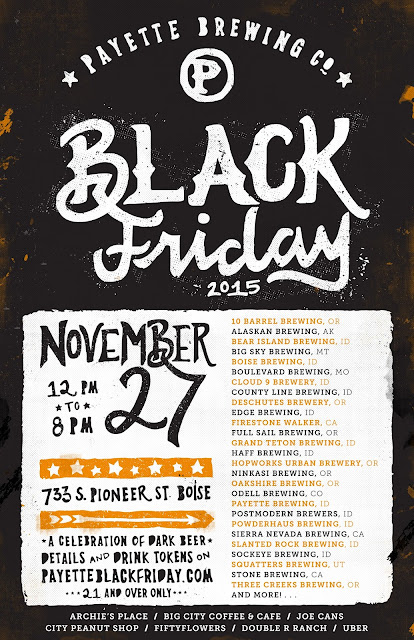 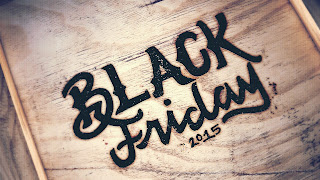 Only Two Weeks Till Black Friday!!!


And I do not mean that shopping thing the day after Thanksgiving.

I mean the Dark Beer Festival for all the Craft Beer lovers in the Treasure Valley on the day after Thanksgiving!  So when your significant other leaves to do their  Black Friday thing, you can do your Black Friday thing.   Mark your calendar now.  Friday, November 27th from Noon to 8:00 PM!!!!

This will be the 4th Annual Payette Brewing Company Black Friday, but Bigger and Better than ever!!  Bigger you say?  Yes, Bigger!!!  The first three Black Friday events were held at the Payette Brewery location in Garden City.  This event will be at the soon to be new location of the Payette Brewing Production Brewery and Tap Room.  The event will be held in the parking lot as the building is under construction.  This area is a lot bigger than the Garden City Site.   And Better!!  Better because this is the 4th Annual Black Friday. And Black Friday just keeps getting better every year with a bigger selection of beer than ever before!

I got to sit down and visit Mike Francis, the founder and owner of  Payette Brewing, at the Grand Opening of the Powderhaus Brewery.  Mike was very excited about the 2015 edition of Black Friday.  He said that he has been collecting and aging kegs of Stout and  Porters from all over the Northwest specifically for Black Friday.  He has promised to have some very unique and one-of-a-kind beer that can only be found at this event.

Most of the Breweries in the area  will have special beer for the Black Friday event including Boise's newest brewery, Powderhaus Brewing.  I talked to Tyson Cardon, co-owner of Powderhaus last week about their opening and Tyson mentioned that they are brewing a very special stout for the Black Friday event.  Also, Marcus Bezuhly, owner of Edge Brewery said the they will have a special barrel aged version of their Blackwater Imperial Stout at Black Friday.

Black Friday will only have Stouts and Porters from other Brewers, but if you need a break from the Dark Beer, Payette will also have many of their other great beers on tap!!!!!


If you are interested in being an event volunteer, there will be two volunteer shifts. Each volunteer will receive a 2015 Black Friday snifter, 3 drink tokens, and 1 Free Pint Card to redeem at the brewery. Volunteers are still needed!  Email: Ashlee@PayetteBrewing.com if you are interested.

Food provided by Archie's Place with will have special dishes for Vegans, Vegetarians and the Gluten-Free crowd. There will be a large outdoor beer garden with tables and chairs so people can get off their feet. There will also be bistro tables for standing, drinking and mingling inside the tent.


"Black Friday Returns and New Location Announced
Garden City, Idaho (November 2, 2015) – Payette Brewing Company announces their annual Black Friday event, a celebration of imperial stouts and porters, on Friday, November 27th at their new facility, 733 South Pioneer Street, from 12:00 PM – 8:00 PM. The event will feature over forty beers from local and regional breweries plus music, food and the 2015 release of Bourbon Barrel Aged Twelve Gauge Imperial Stout. Admission is free for those over the age of twenty-one with drink tokens and glassware at an additional charge.
Payette Brewing has been collecting imperial stouts and porters from breweries such as Sierra Nevada, Odell Brewing Company, Deschutes and more to showcase on Black Friday. In additional to those beers on tap, Payette will release their Bourbon Barrel aged Twelve Gauge Imperial Stout in twenty-two ounce bottles.
Payette Brewing has once again partnered with Joe Cans and Big City Coffee and Café for the event to raise funds for breast cancer detection services. Attendees can support the cause through a silent auction of two Holiday trees or purchasing coffee from Joe Cans. Big City Café will also be serving treats alongside City Peanut Shop, who has created once again, a special peanut brittle for the occasion and Archie’s Place food truck will be serving up some tasty eats throughout the event.
Payette Brewing Company will also have merchandise available for sale to get a jump start on that holiday shopping at a special discounted price only available on Black Friday. Payette Brewing also encourages responsible consumption of alcohol so they have teamed up with UBER to offer safe rides to and from the event at special rates!
If you or your group would like to volunteer for the Black Friday event, please contact Ashlee Struble with Payette Brewing Company at Ashlee@payettebrewing.com. To purchase advance tokens for the event, please visit www.payetteblackfriday.com"

Aerial View of the Black Friday Location at the new Payette Brewery location (Click on Picture to see larger size): 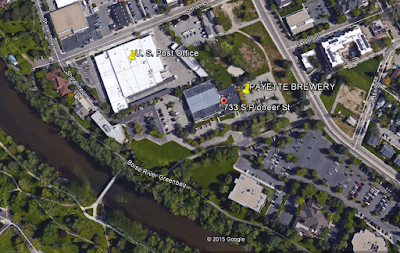 Note the  convenient proximity to the Boise Greenbelt.

WARNING!  MANY OF THESE BEERS WILL BE IMPERIAL STOUTS RANGING FROM 9 TO 12% ABV!!!!!  So Plan ahead with a DD or other alternate means of transportation that will keep you from behind the wheel after this event!  Check out the local services below to take you home.


Contact BUDDIES DESIGNATED DRIVER SERVICE 7 Days a Week, 7:00 pm to 4:00 am, getting both you AND your vehicle home safely. Call or Text 208-870-7271 or for more infohttp://buddiesdd.com/ (Use Your BOISE BEER BUDDIES Membership Card and Receive $2 Off!)

Story by Bob Hubler
Posted by BoiseBeerCulture at 11:52 AM