Tidbits From the 2015 Black Friday

Tidbits From the 2015 Black Friday by Bob Hubler

My wife and I arrived a little after 11:30 and started tasting the beer at 11:45.  We were greeted at the entrance by Mike Francis and Paige Coyle who gladly took our money in exchange for tasting glasses and tokens.

So many choices and so few tokens!  The beer has very high ABV and so a little taste went a long way.  We had a total of 15 tokens and 45 beer choices!!!  So we only able to taste about 1/3 of the beer, but we both would have liked to have tried all 45.  Fortunately, we had already tried some of the beer on the list. 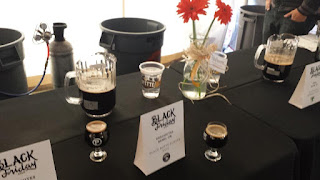 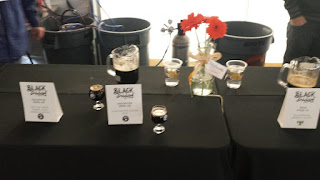 We tried 15 beer samples in about 2 hours, and we did not find any that we did not like.  But my favorite was the Bear Island Cherry Imperial Porter from our local Beth Bechtel.  We took home a bottle of the 2015 Twelve Gauge from Payette Brewing.

My Favorite Beer from outside Idaho were Evil Empire (Bourbon  Barrel Aged) from Heretic, Dark Truth Stout from Boulevard, Wild Turkey Bourbon Barrel Stout from Anderson, and Motherland Russian Imperial Stout from HUB!  But there were many other great beers that we got to sample.

We hope many of you got the chance to make this event this year, but if you did not make it down this year, put it on your list for 2016.  Thanks Mike and the Crew for putting this event together!

We got to visit with Daniel Love from Mother Earth Brew Co. while we were at Black Friday.  Dan and his wife have bought their home in Idaho and have moved in.  He told us that Mike Westley, his Area Sales manager has decided to move to Boise also.  Dan has done a lot of traveling across Idaho promoting his brand.  He said that he has been to Teton in Eastern Idaho and to Sandpoint in  northern Idaho and is getting to know how large our state really is!!!!

The ground breaking on the Nampa Brewery will not happen until February, but the brewing equipment has been ordered and they are in the process of applying for all the local, state and federal licenses.  Dan still hopes to be brewing by June in his new production brewery.  I  told him it would probably be closer to August, but I am hoping for June  too.


We got some snacks  from Dan at the City Peanut Shop Booth.   All  really good, but the caramel corn flavored with Centennial Hops was really special.  Sweet up front with that hop bitter at the back.  We really like to shop at the City Peanut Shop for Christmas Stocking Stuffers.  Well worth the visit when you are in downtown Boise.

After we left the Black Friday Black Beer Event, we stopped by The Grind/Post Modern Brewers to warm up and have a Great Grind Burger.

While there, we got to visit with Head Brewer Marvin Kinney who had some very interesting news about Simian Brewing. Marvin is still persuing his dream of owning and operating his own brewery, most likely to be located in Canyon County.

Come Down and Celebrate The First Anniversary of The Grind/Post Modern Brewers on Wednesday, December 2nd.  Click Here for Details

While at Post Modern Brewers, we met Jen Anderson.  Jen works at the PreFunk in Meridian Idaho.   She invited us to stop by and check it out, so we went there on our way  back home.

This was our first visit to the Meridian Version of the PreFunk Growler Fill Station/Beer Bar. Click here for their Facebook page.

The first thing we noticed was the great ambiance of the downstairs beer bar.  Reminded me a little of the Cheers Bar in the old TV show.  This is the third and newest PreFunk in the Valley and provides the same great beer choices of the first two.  This one is larger and has more tables and a larger bar.  Great place to stop and have a beer and get your growler filled.

We got a bottle of the Goose Island 2015 Bourbon County Brand Stout while we were there.  The highly sought after beer was in the back, so we had to ask for it.  Then we filled our Growler  with some Brown Shugga and headed home.

Posted by BoiseBeerCulture at 11:52 AM